There is nothing quite as exciting as travelling to somewhere that you have never been to before!  That feeling of not knowing what lays around the next corner, what you will see and whom you might meet, are all good reasons to venture to holiday destinations which you have never tried before. I had never been to any of the Scandinavian countries I was about to visit on this trip, and obviously, I was very excited to discover the cold North, as well as travelling to my dream travel destination of St. Petersburg, Russia.

The trip began in Copenhagen which was pleasantly cool after the heat wave in Cyprus, which had sent temperatures soaring before we left. It was a nice place, although smaller than I had imagined. We had taken a trip around the city and to be honest, you could have walked around the city center or taken a hop-on-hop-off bus just as easily. As on most guided tours there was a lot of historical information, which is great, but I probably only retained a small amount of this and am not going to bore you with lots of facts, particularly as most of the information was about the river, port and new buildings, which to be honest, looked a little unexciting.

The nicest part of the city is Nyhavn, this is the area with the fish restaurants and bars next to the canal, and it’s a very good spot to relax, take in the atmosphere and have a cold Carlsberg if you are so inclined. After our city tour that’s exactly what we did, before our trip to the ice bar, which turned out to be a lot more fun than we had imagined that it would be.

In the Reflections Ice Bar (the only one of its kind in Denmark, they seem to like to tell you – it opened about a month ago). The walls, tables, and bar are all completely covered with ice and there are some sculptured ice pieces too. It feels as if it is freezing, although it’s probably a few degrees above. It cost around 20 euros for entrance (this is a conversion price from Danish Krone) and for that, you got to wear an enormous cape, which stops you from literally freezing ( although you do end up looking like you have just escaped from an old episode of Dr. Who) and your first 2 drinks. There is a shot of vodka or whiskey served in a molded ice cube, and a cocktail mix in a plastic pot, that resembles one of those plastic dispensers that you use for washing powder! This is a traditional kåsa or cup, apparently. I can report that both drinks were delicious and the bar was very lively and a lot of fun.  Thanks to our enormous hooded cloaks we were able to stay on, for our full forty minute slot.… 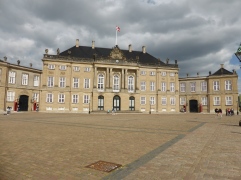 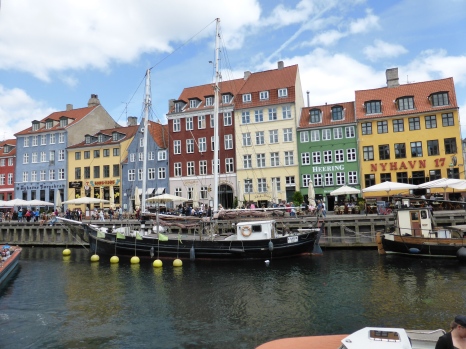 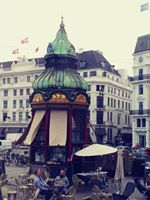 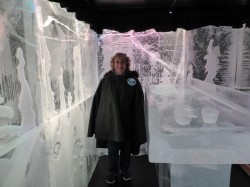