In a recent radio interview with Ron Clark at Chat and Spin Radio, a station based in Washington Tyne & Wear England, I was asked what influenced me to write my short story Nightmare Asylum.

As I have mentioned in previous interviews, I experienced a recurring dream in my twenties, which really frightened me. I do believe the nightmare was associated with visiting a relative in a couple of scary-looking mental hospitals when I was young. 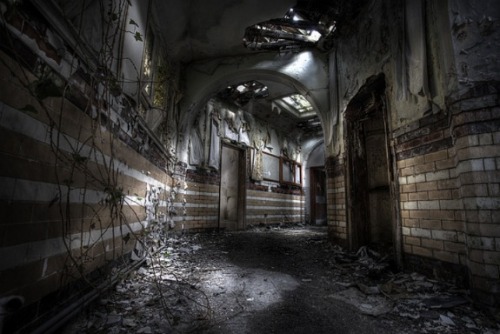 I based the design of the building in my story on the Winterton Psychiatric Hospital just outside of Sedgefield, County Durhan (see photos). I remember it was such a chilling place to visit as a child. The building initially opened as the Durham County Lunatic Asylum in 1858. It had a dark, foreboding atmosphere, and many former patients were afraid of being admitted there, including a member of my family, who was terrified of not coming back out. This was in the seventies when electric shock therapy was used for many psychiatric conditions including, paranoia, agoraphobia and even postnatal depression.

It remained a place for treating mental illness until it was closed in 1996 when something very chilling was discovered. During the demolition of the building, contractors broke through into a series of underground basements tunnels and discovered hidden rooms which contained, “various preserved specimens” which had been removed from unfortunate inmates…

Interview at Chat and Spin Radio

My Tweets
Join 3,797 other subscribers